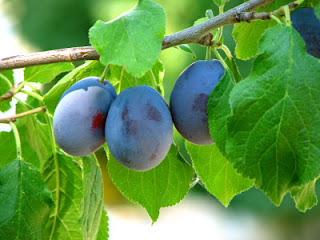 When we moved into our house we gained a mature Damson tree. Apparently the Romans introduced the humble Damson to the UK, using the dye from the skins for cloth. Us Brits use them for wine, jam and pudding. Who needs purple dye when you can have alcohol and dessert. I have never imagined myself as the kind of person that made jam. For me jam making conjures up images of old ladies storing jam jars in dusty boxes and making odd taste combinations, or middle aged women with big bums, short hair and hippy jewellery.
The Damson tree taunted me for weeks from the bottom of the garden. Over the summer branches became laden down with fruit, first green, then an increasingly beautiful deep purple. The rapidly approaching extra work picking all those Damsons or picking them up rotten off the lawn was anticipated with a distinct feeling of dread.  Last year I was too pregnant to face the issue so popped a note on freecyle – ‘Free Damsons please come and pick’. Four sets of people turned up with ladders and the problem went away.  This year I felt that it was time to act like a grown up and face the fruit tree.
Several rather boring hours of picking and over 40 pounds of fruit later it was done. I gave most of the fruit away, keeping a little.  I made fresh Damson cake, using the recipe here, swapping the plums for Damsons. It was well received when we visited friends, that recipe is turning out to be a real gem.
So to the Jam making. The recipe looked simple – Damsons, water, sugar.  No peeling, chopping or stoning required. My kind of cooking. All was going well. Until the stones were supposed to rise gently to the surface to be skimmed off. I waited, a few popped up. Waited some more, nothing. So there I am with a tea strainer and a small spoon dredging the stones out of a huge pan. That got dull quickly. I tried the sieve which just clogged up. By now, me, most of the kitchen and a surprising amount of cutlery were covered in stickiness – purple stickiness. The fact that in between I was painting the hallway (not purple) probably didn’t help. Definitely guilty of a lack of focus. By this point I’m smeared with both paint and half made jam.
As a last resort out came the large colander. I went through the ‘pulp’ of the fruit and pulled the stones out and then tipped the juice and remaining pulp back together. Mixed it up and got on with the recipe and cleaning up.
The second batch of Jam was achieved a couple of days later with more focus and far less mess. The Jam its self is delicious.
Do I truly feel that jam making will turn me into an old lady overnight, will I be wearing purple (not counting stray jam), or developing a big bum and an odd taste in accessories? Strong emphasis on the no there. However, I can’t help but feel jam making is a very ‘housewifey’ thing to do and somehow I don’t feel quite comfortable adverting my new skills.  I wonder what that says about me.
Damson Jam
Makes: 7 x 225 ml jars
Ingredients 1.25 kg damsons 500 ml water 1.5 kg sugar
Method
Remove the stalks, wash the damsons and put into a large pan or preserving pan with the water. Cook slowly for about 30 minutes until the damsons have broken down. Add the sugar and stir over a low heat until dissolved. Increase the heat and boil for about 10 minutes before testing for a set. Remove the stones as they rise to the surface, letting any liquid drip back into the pan. Test your jam for a set — setting point is 105C (220F). If necessary, boil for a further minute then test again. Continue testing at one-minute intervals, as necessary, until the jelly has reached setting point. Remove the pan from the heat, skim off any scum and allow to cool briefly. Carefully pour into hot, sterilised jars. Seal the jars and allow the jelly to cool completely before labelling and storing.
at 21:59

Welcome to my world

Here we have the musings of a once all professional, polished and organised lady. She is still professional, but works smarter not longer, has two small children, one husband, yet retains the same penchant for adventures, Guides, cooking, gardening and SciFi, despite having considerably less polish and a hell of a lot more fun.

Samantha
Leamington Spa, Warwickshire, United Kingdom
Hello. My name is Samantha and here are some facts about me. I’m fluent in toddler and grumpy male. I have a husband I'm crazy about and two children. If it’s on the menu, I will always choose the cheesecake. Hablo español. The cookbook I use the most is Google. I'm very curious who you are. 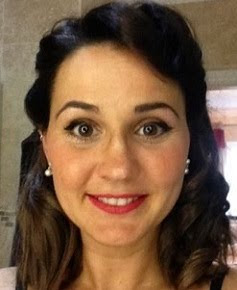 Ready to go out (lets be real, I don't look like this all the time!)